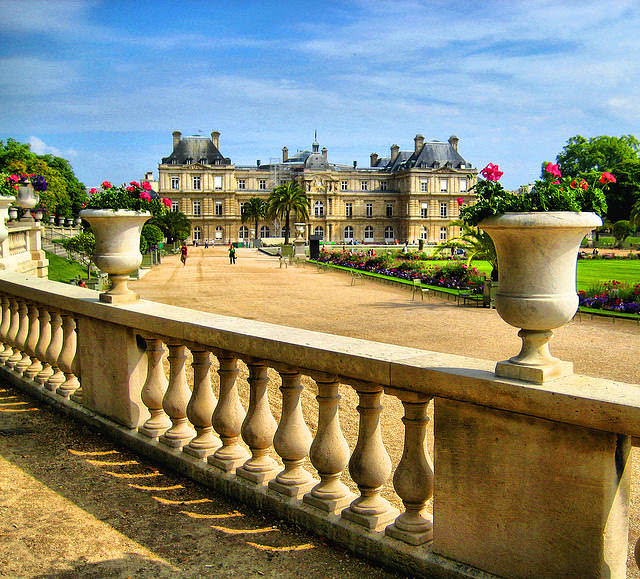 HOURS: Seasonal. Visit the official website for up to date hours.

Luxembourg Gardens (Jardin du Luxembourg) is resident in the 6th arrondissement of Parks and was created in 1612 by Marie de’ Medici who was the widow of King Henry IV of France. The Gardens were recreated as a result of Henri IV’s assassination in 1610. Marie de Medicis could not continue living in the Louvre with his memory and had the Palais du Luxembourg and the surrounding gardens built to replicate her childhood home, Florence’s Palazzo Pitti. The Luxembourg Gardens were completed in 1625, but did not reach their present dimensions until 1790. The park has been open to the public since the 17th century. The construction of nearby streets and avenues during the Second Empire reduced its size, but not its picturesque appearance.

The garden as a center piece of the Luxembourg Palace. The park covers 23 hectares and id largely devoted to a green terrain of gravel and lawn populated with statutes and fountains. In the southwest corner of the gardens resides an orchard of apple and pear trees and the théâtre des marionettes. It is not rare to partake in a free musical performance which are presented in a gazebo on the grounds. The garden contains just over a hundred statues, monuments, and fountains, scattered throughout the grounds. Surrounding the central green space are about twenty figures of historical French queens and female saints commissioned by Louis-Philippe in 1848, standing on pedestals.

The Luxembourg Gardens are well integrated into the fabric of the city making it easily accessible and enjoyed by many. On a visit to the garden you will find people strolling, playing chess, reading, children playing and others enjoying one of the cafes.