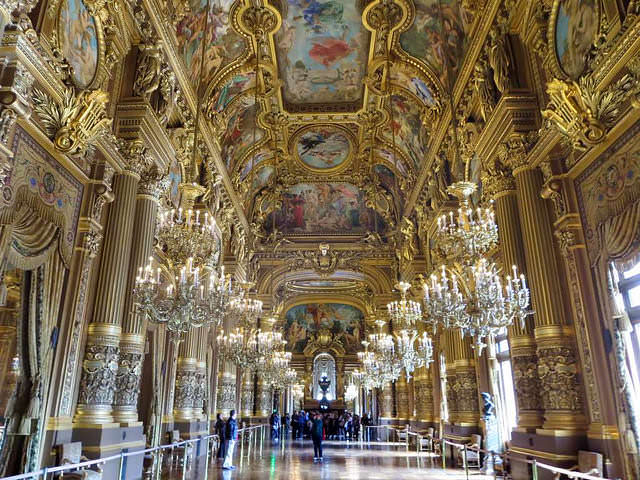 HOURS: Seasonal – visit the official website for up to date details.

This architectural legend is most famous for playing host to the fictional omnipresent Phantom of the Opera, Palais Garnier still exudes the same enigmatic atmosphere as it did in the late 1800s. The fabled phantom of the opera lurked in the opulent opera house commissioned by Napoleon III and designed in 1860 by Charles Garnier. Palais Garnier stands just north of the Louvre and can be reached by several of the metro lines. This nineteenth century Opera House is one of the most opulent buildings in Paris and one of the most recognized opera houses in the world and is now home to the Paris Ballet.

A few highlights of the Opera House include: a chandelier that weighs and impressive seven tons, the grand staircase is made of white Italian marble; the grand foyer is dedicated to the allegorical muses decorated with frescoes and mosaics, the elegant and impressive stage area and marble rotundas for high society.

Many buildings around the world have been inspired by the Garnier Opera House, including the Thomas Jefferson Building in Washington, the Juliusz Słowacki Theatre in Kraków and the Theatro Municipal do Rio de Janeiro to name a few.