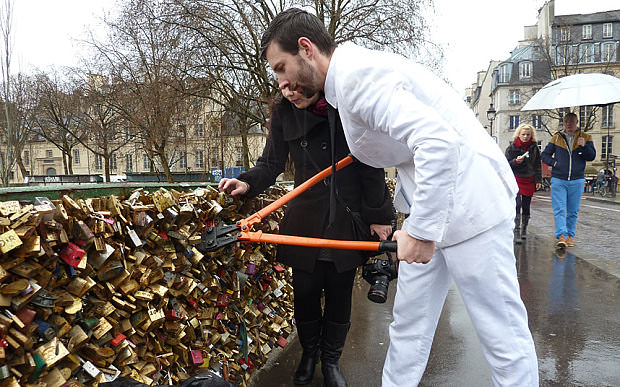 Romantic couples who spent Valentine’s Day in Paris and decided to fasten “love locks” on the city’s bridges were shocked to find locals armed with bolt-cutters removing the padlocks.

The authorities are at their wits’ end after the failure of various strategies to rid bridge railings of hundreds of thousands of padlocks left as tokens of love by couples visiting the city known as the capital of love. Their weight caused a section of metal mesh on one bridge to collapse last summer, raising fears that railings could fall on boats below.

Many Parisians find the padlocks unsightly, and several groups have now formed to encourage people to take matters into their own hands. On the Pont de l’Archevêché near Notre-Dame cathedral on Sunday, visiting couples were astonished and some dismayed to find a man wearing a white suit and shoes, attacking “love locks” with a giant bolt-cutter.

“At first people are surprised but nine out of 10 tourists understand once we explain why we’re doing this and they start cutting themselves,” said Simon, 30, an Australian computer programmer living in Paris. “The city lives from tourism and although they’ve banned the padlocks, I don’t think they’ll ever be able to enforce it,” he said. “If the City of Paris wasn’t opposed to the padlocks, I wouldn’t permit myself to come along and cut them off.”

Another group took a gentler approach to removing the locks.

“We’re picking them so we can open them without breaking them,” said Pauline Kabioc’h, a member of an artists’ collective that is teaching people to pick the locks. “We want to liberate the love people put into these padlocks rather than breaking it apart.”

City authorities have replaced wire meshing on part of the Pont des Arts footbridge with glass and see-through plastic panels to stop tourists attaching “love locks”, but they have been defaced with graffiti.

Not everyone agreed. “The locks are romantic and part of the folklore of Paris,” said Clément Borderies, 30. “Why remove them? Just find a way to make them safe.”

Paris is moving closer to a bid for the Olympic Games in 2024, exactly a century after it last hosted...