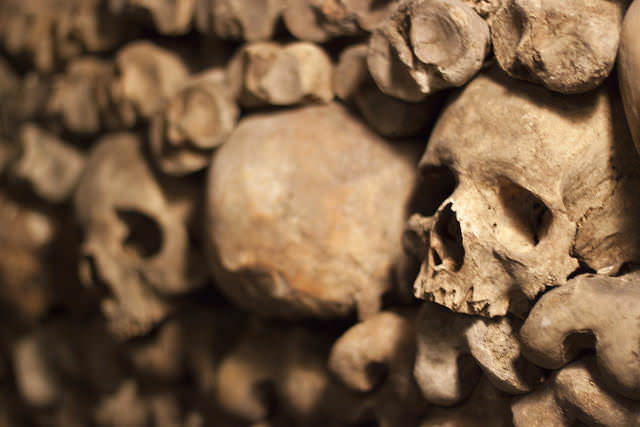 The Catacombs of Paris have long been a popular visiting spot for locals and tourists. An underground burial ground, the tunnels are positioned directly under the streets of Paris. The ossuary’s name was accorded in reference to the Rome Catacombs (an ossuary is a site made to serve as the final resting place of human skeletal remains). The catacombs, consisting of approximately 200 miles of tunnels, are located south of the former city gate, Place Denfert-Rochereau, and hold the remains of approximately six million people that fill the renovated caverns. The tunnels were once historical stone mines, making it one of the world’s largest cemeteries. The Catacombs became an attraction site early in the 18th century and was opened to the public in 1874.

Prior to this, Paris’ earliest burial grounds were located in the southern outskirts of the Left Bank. Circa, the 5th century settlers left this settlement and moved to the Right Bank. Instead of burying the dead away from the settlement, the settlement began its life with cemeteries at its very center.

This main burial ground, the Cemetery of the Innocents, had been the site of many burials for nearly ten centuries and became a source of disease and infection. In 1875 the city administrators prohibited the use of the cemetery and began to relocate the remains to a lesser public place. To create space for more bodies, graves were exhumed and their bones packed into the roofs and walls of charnier galleries that were built to the inside of the cemetery walls. Authorities needed to move the graves in Les Innocents, and the last straw occurred in 1780 when a basement wall of an adjourning property gave way under the weight of the mass grave. After this incident, all inner wall burials were forbidden.

The Left Bank had rich deposits of limestone and had been mined during the early centuries creating a maze of tunnels under the city of Paris. These quarry sites were seen as the perfect location to house the remains of the over populated cemeteries.

The translocation of the remains took place between April 7, 1786 and 1788. The process used to be led by blessings and consecration of the site. During this time at dusk, a procession of priests would sing the service for the dead along the route taken by the carts loaded with bones. In ceremonial right, the carts of the dead were covered in a black veil.

The catacombs in their first years were just a bone repository, however Louis-Étienne Héricart de Thury, renovated the catacombs, and transformed the caverns into a public mausoleum. In addition to directing the stacking of skulls and femurs into the patterns seen in the catacombs today, he used cemetery decorations to complement the walls of bones. Moreover, several rooms were created to exhibit various minerals found in the tunnels under Paris, as well as the various skeletal deformities found during the catacombs’ creation and renovation.

The entry to the catacombs is in the western pavilion of the former city gate. Descending a narrow spiral stone stairwell of 19 meters to the sheer darkness and silence. Then pass through a long and twisted hallway of a mortared stone, visitor’s approach a sculpture that existed this part of mines became an ossuary.  At the entrance of the catacombs, there stands an amazing stone portal in-scripted with the words: Arrête! C’est ici l’empire de la Mort (Translation: ‘Stop! Here lies the Empire of Death”).

Beyond the entrance, is the halls and caverns of walls crafted from arraigned bones. Some of the arrangements are artistic in nature, such as a heart-shaped outline in one wall formed with skulls embedded in surrounding tibias; another is a round room whose central pillar is also a carefully created ‘keg’ bone arrangement. Along the way, there are other monuments, that were established before the catacomb renovations. There are rusty gates blocking passages leading to other unvisitable parts of the catacombs that are either not renovated or are not navigable for regular tours.

Address: 1, avenue du Colonel Henri Rol-Tanguy – 75014 Paris
Hours: Open daily from 10am to 8pm, except Mondays and public holidays.
Last admission: 7pm.
Conditions and accessibility: Visitor numbers are restricted to 200 at any time. Admission may be delayed for a short time during busy periods.
Distance covered: 2 km. Duration of the tour: 45 minutes.
No toilet or cloakroom facilities available. Animals are forbidden.
Temperature: 14°C.

130 steps to go down and 83 steps back up to street level.
The tour is unsuitable for people with heart or respiratory problems, those with a nervous disposition and young children.
The Catacombs are not accessible by persons with reduced mobility.
Children under the age of 14 must be accompanied by an adult.

Weak euro is a good thing for expats

While a weak euro is not encouraging and beneficial for residents in France, it's been a boost to many retired...