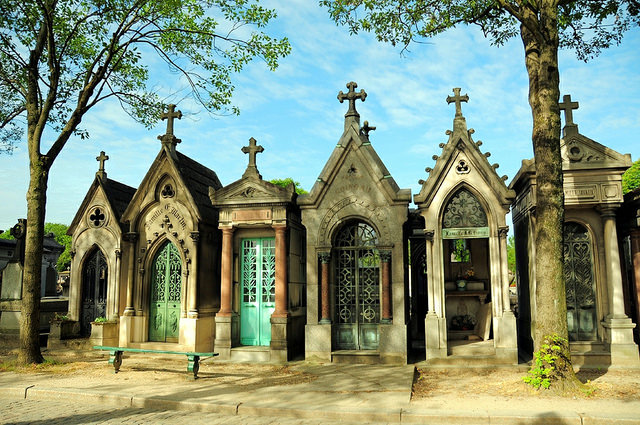 Père-Lachaise Cemetery is located on the northeast side of Paris. Occupying approximately 110 acres among a forest of trees and is considered not only the largest cemetery in Paris but also the largest park. It is estimated between 300,000 to 1 million souls are buried in Père-Lachaise.

The cemetery is named after Father François de la Chaise d’Aix (commonly called le Père la Chaise), lived there before the cemetery was constructed thus giving it its name. By the end of the 18th century burial spaces in Paris were far and few between as many cemeteries were filled beyond capacity and locals feared spread of disease. With the movement of graves to the Catacombs, Père-Lachaise was established as a municipal cemetery in 1804. In order to draw attention to its location, city officials drew attention to the cemetery by relocating the remains of famous people there. It wasn’t long, before Père-Lachaise became a place of status for the deceased.

Renowned for its great collection of human talent in the world, Père-Lachaise is often known as one of the most visited cemeteries in the world. Maps are posted at the entrances that guide visitors towards the most famous graves, however on every path there are monuments, which make you, stop and remark. While it may seem a bit macabre, there are so many famous tombs, and artistry in the graves, it becomes like a visit to a museum.

While the cemetery overall is a fascinating walk through history and culture there are a few top stops that should be on your list to see while visiting Père-Lachaise.

Frédéric Chopin is one resident of this cemetery. Chopin grew up in Warsaw and settled in France later in his life. After a long battle with lung disease, Chopin died in Paris and his body was buried in Père Lachaise, though his heart was removed for burial in Warsaw. His grave is usually adorned with bunches of flowers, and is notable for the statue surmounting it, the muse of music, Euterpe, who weeps as she contemplates a broken lyre.

Jean-Baptiste Poquelin, better known as Molière, was a great comic playwright of all time. Molière suffered for many years from TB. Despite his illness, Molière insisted on performing in his play Le Malade Imaginaire. While playing the part of the hypochondriac, he succumbed to a coughing fit, and died later at home. Since Molière was an actor, he was not allowed to be buried in consecrated ground, and only the intervention of the king allowed him burial among the unbaptized infants. Later in 1817, his remains were transferred to a tomb in Père Lachaise.

Théodore Géricault lived a relatively short life of only thirty-two years, but was known for his famous paintings ‘Raft of the Medusa’ which is one of the most visited paintings in the Louvre. Géricault’s tomb is a masterpiece; a reclining bronze of himself with his paintbrush and palette tops the monument. The statue shows Géricault as vital and alive. On the side of the tomb is a bronze version of The Raft of the Medusa.

Oscar Wilde died in France after leaving England to avoid the shame of his conviction for ‘gross indecency. Wilde’s tomb, which includes an angel displaying its genitalia, was defaced soon after its erection. Today the monument stands covered in lipstick where women kiss the stone. Engraved on the tomb is a verse from the Ballad of Reading Gaol by Wilde:

And alien tears will fill for him
Pity’s long-broken urn,
For his mourners will be outcast men,
And outcasts always mourn.

Peter Abelard and Héloïse is one of the best romances of the Middle Ages. Abelard was a great French philosophers and one of the great teachers of the time, he was hired to teach Heloise, a rich young noble woman. Heloise and Abelard started an affair, which led to an illegitimate child and a secret marriage. When Heloise’s uncle found out about the affair, he had Heloise placed in a nunnery and Abelard was castrated. The letters the two sent to each other over the course of the rest of their lives are famous. The bones of the two lovers were buried together in a tomb in 1817. A tradition of modern lovers is leaving letters at the tomb of these two great lovers.

Jim Morrison the infamous lead singer of The Doors, is one of the most popular in the cemetery. After Morrison died in 1971, in Paris, he was buried in an unmarked grave in Père Lachaise. When the cemetery placed a simple marker on the site it was stolen as well as to a bust of Morrison placed on a simple gravestone. Many visitors leave gifts on Morrison’s grave and many write poems or other messages around the gravestone. The cemetery has had hired a guard to ensure that visitors to Morrison’s grave do no more damage to it or other tombs.

Located in the 20th arrondissement

Plan to go on a sunny day. Pere-Lachaise can be a remarkably place to meander in the sun. In the spring and summer, the greenery and flowers make for a picturesque visit. Enjoy the play of light and shadow on the tombs.
Familiarize yourself with the cemetery ahead of time and choose a few sites you’d like to visit. You’ll get more out of your stroll that way.

Make sure to walk up the hill to the cemetery’s summit. Beautiful views of Père-Lachaise and parts of Paris can be had from the hilltop.

Anyone who has a work mobile phone in France will give up their right to privacy after a court order...