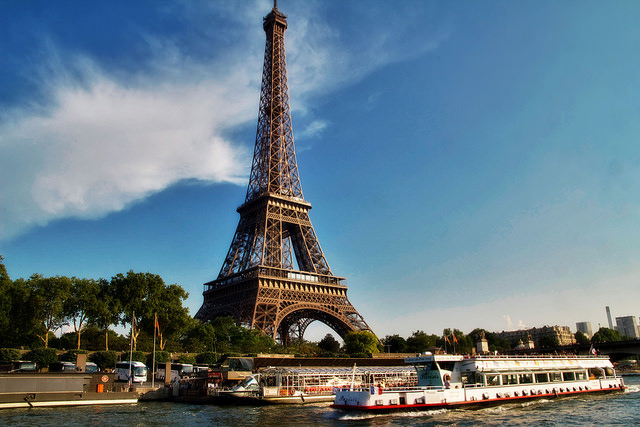 Either touring Paris by boat, or cruising through the historic French waterways, every boating trip provides an unparalleled experience. The city fans out in a picturesque manner as you maneuver through the Seine River or Paris’ miles-long networks of canals and river ways. By taking a cruise from Paris, you can get a glimpse of some of the city’s most mythical spots, enjoy a romantic dinner, or just sit back and revel in the fresh air while floating in a scenic setting.

Typically the best time to take a cruise is generally May through mid-September, when skies tend to be clearer and temperatures are generally warmer. Fall and winter tours are still worthwhile, however keep in mind that the wind off the water and frequent rain can make sitting on the open-air deck less than desirable if your cruise is open aired.

Touring Paris via the Seine River is a fabulous way to familiarize yourself  with many of the city’s stunning monuments, historical buildings, and ornate bridges, including:

There are several companies that offer day and evening tours throughout the year that will guide you down the Seine.

Bateaux Mouches is one of Paris’ most famous boat tour companies and is easily recognizable by its enormous decks and bright orange seats. Bateaux Mouches has a fleet of nine boats, six of them are boat restaurants, and tables overlook the banks of the Seine to allow each visitor the glorious view of Paris.

Bateaux Parisiens is also a well-known Paris boat tour company offering narrated tours and fine dining. The fleet is comprised of 12 panoramic boats, with five of them offering restaurant services.

Les Vedettes du Pont Neuf offers a simple hour long cruise which allows visitors to discover the most beautiful monuments in Paris via the Seine River.

Vedettes de Paris offers a variety of options for touring on the Seine and is well worth visiting their site for the options.

What better way to see Paris and surrounding country than a cruise from Paris down the Seine River. Several organizations offer cruises starting in Paris touring through to Normandy or Leon for example. Some of the offerings can include the following:

Paris cruises offer a relaxing comfortable trip down the Seine through the French countryside on luxury ships. Your travel itinerary will consist of something similar:

Day 1–  Arrive in Paris and be transported to the ship

On this stop you will have a chance to visit Monet’s home in the village of Giverny, where he lived and worked for more than 40 years. Monet transformed the property into an enchanted vision that he painted. Stroll through the grounds and admire the famous Japanese bridge and water garden that inspired him. A hike to Château Gaillard takes you to the dramatic white-stone remains of Richard the Lionheart’s 12th-century stronghold. The evening offers a Captain’s Welcome Reception and Gala Dinner.

Normandy’s location to the sea has made it the site of many battles, including the famous D-Day Invasion by Allied forces during WWII. You can choose to visit Juno Beach, where the 3rd Canadian Infantry Division landed, and tour the exhibits at the Canadian Center. Additionally you can drive to Bayeux to see the famous 11th-century tapestry depicting the Battle of Hastings. The stop in  Rouen offers a walking tour or guided bicycle ride along the Seine River.
Rouen has managed to preserve many notable buildings despite being invaded, conquered, and bombed during its historic past. You will visit stunning Gothic cathedrals, the medieval quarter, and a Renaissance clock tower known as the Gros Horloge. The walk ends at Vieux Marché, where Joan of Arc was burned at the in 1431. The bike tour Or along the Seine are popular with locals, and cycling on the docks is part of the quintessential Rouen experience.

Crossing the river delta via the Normandy Bridge, you will travel through the Calvados countryside to Honfleur, a town re-created in paintings by such artists as Monet, Courbet, and the painter who inspired so many others to come to Honfleur.

In Auvers-sur-Oise you will follow the footsteps of impressionist Vincent van Gogh. Your guide will transport you to the 19th century and give you a sense of the artist’s final days as you stand in the very place where Van Gogh set his easel. Van Gogh is buried beside his brother, Theo, who died a year later. In the evening, enjoy a Captain’s Farewell Reception and Gala Dinner.

The city tour includes the Champs-Élysées, where you will pass the Arc de Triomphe before stopping at the Champs de Mars for a photo opportunity of the Eiffel Tower. You will continue on to the Place Vendôme, Hôtel de Ville, Notre Dame Cathedral, and the Latin Quarter. From there it is on to Les Invalides, the Louvre courtyard, and Luxembourg Gardens. Other choices include a walking tour of the Île de la Cité, the historic center of Paris, which is home to the famous Notre Dame Cathedral. The tour includes a stop by an open-air market to shop as the Parisians do for bread, cheese, and other regional delicacies.

Disembark the ship and transfer to Paris Charles de Gaulle Airport for your flight home or other transportation if you stay is longer.

There are many organizations that offer cruises in Paris with different stops and agendas. It is well worth your time to investigate the options to fine tune the perfect cruise that suits your tastes and travel plans.

A 30 year old French woman working for the Word Bank in the Yemeni capital Sanaa was kidnapped on Tuesday...