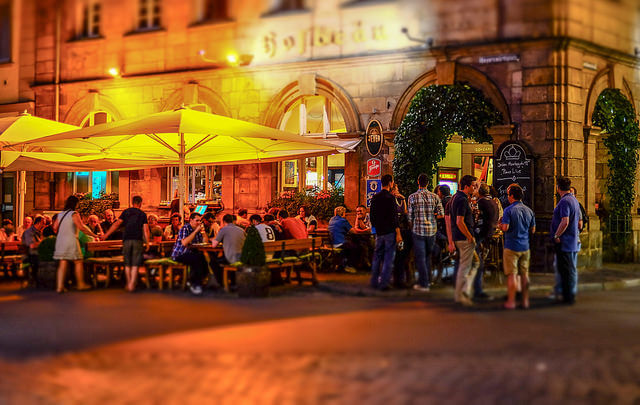 In Paris, nightlife is a way of life for many locals. Many trendy bars transform into clubs after dark and there is something for everyone. These clubs have a variety of settings, music, and array of people. Most of them have strict dress codes and are quite particular about their “look.” The most infamous are located in the Champs-Elysées area. While these clubs do not typically require an admission fee and are for people in their thirties, you may be required to dress fashionably.

There are places to go out in nearly every neighborhood, except perhaps in the southwest part of Paris (16th and 17th arrondissements) which is not typically lively.

Le Marais is highlighted with funky bars that offer great music. Many of the bars in the area also have a restaurant and sometimes will offer two different atmospheres giving you the choice of style you are looking for. You will also find wine bars, terraces and a few pubs Popular in the area is the Costes hotel bar, near the Louvre, which is famous for its electro lounge music, but is very trendy and quite expensive. Le Marais has become one of Paris’ most dynamic night life spots as well as home to a thriving gay and lesbian scene.

The Latin Quarter has a mix of types of bars which is perfect either for college students or older people with more sophisticated tastes. Pubs like the Pub Saint Germain offers unique fancy cocktails or the The Frog and the Princess are hot spots for students. These are only a few of the dozens of bars in the neighborhood.

Near the Latin Quarter on Saint-Germain, are full of fancy bars. Styles range from pubs to elegant places where famous people go to have a drink. The thing to do is walk around Saint-Germain Boulevard and look at the variety and chose one that agrees with your preferences for the evening.

Bars in this area tend to attract a young local crowd. Many of these establishments are often small and crowded. These are perfect for pub-crawling but can become a bit dull if you plan on staying in the same bar all night. On the rue de Lappe, you’ll find places where you can have a drink in peace with nice lounge atmospheres, hype music and usually food. A bit further from the Place de la Bastille, toward Charonne, you will find nice and less crowded bars like La Plage and Le Pause café.

Bustling and exciting, but overcrowded and noisy, Bastille (Metro Bastille) is best suited to 20-somethings looking for a lively party. Nightlife here is a mix of traditional cafes, classy nightclubs, dive bars, and music venues. Bar hopping down hectic rue de Lappe or Rue de la Roquette is a good place to start. Salsa or Marenge dancing is also in order.

The Champ Elysees is to avoid if you’re looking for authentic Paris nightlife. The famed club scene typically comprises of tourists who haven’t made it past the Eiffel Tower. However dedicated clubbers will find this area to be the best choice however dress Parisian chic to get past the doormen.

Oberkampf is known as the city’s coolest new hangout and has become popular with a trendy Parisian crowd. The Oberkampf remains a favorite, however is has become somewhat alienated due to overcrowding.

Branded Paris’ brothel center, Pigalle is no match for its counterparts in Amsterdam. With attractions like the Moulin Rouge, Parisians and tourists alike flock here. The upper heights of Montmartre offer a less gritty ambience.

Paris offers many hot spots as well as quaint locales for a night out on the town. Every area has its local haunts and variety offering something for everyone. Remember that Europe is a bit different and true night clubbing really only gets going after midnight and can continue on until the early hours of the morning. Find your style of club and have fun!

On Wednesday, much of northern France was affected by a spike in pollution which resulted in the Eiffel Tower disappearing...