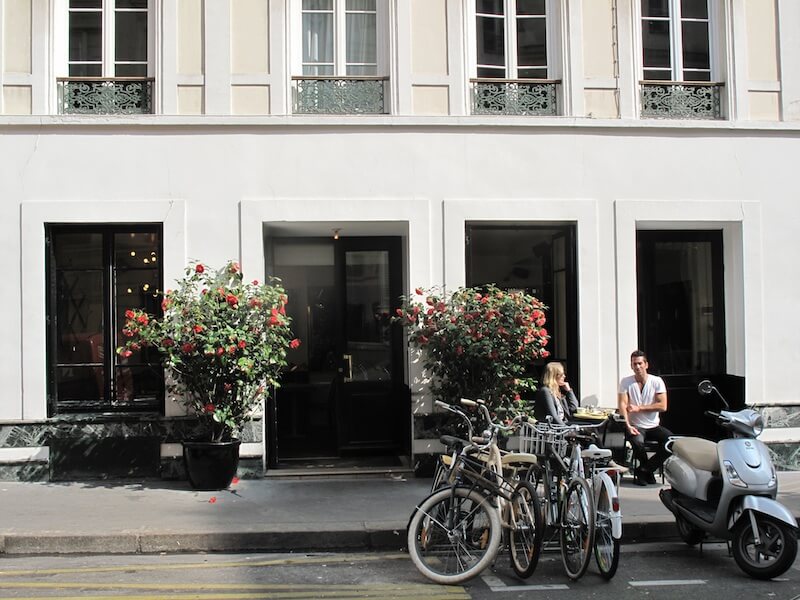 Hotel Amour, located  in the trendy 9th arrondissement of Paris, is a unique 24 room establishment featuring an in-house restaurant. This review will look at what Amour offers and why you should or should not choose this hotel for your stay. At the Hotel Amour, the rooms are a welcome departure from the typical French family owned or commercial hotel experience, ideal for travelers with more eclectic tastes.  Located in the former red light district of Pigalle, this hotel is a tribute to a largely bygone era, with its erotic artwork and trendy mix of modern and traditional furniture.  Ideal for couples or groups of friends, the hotel offers young people plenty opportunities to socialise, wine and dine with locals and foreigners alike.  If you’re fond of entertaining and plan on making a few friends while in the city, this hotel even offers two rooms with their own private terrace, where you can play host for an evening.

Each room at Hotel Amour shouts Paris, especially considering the thought and effort put into decorating them.  Popular artists such as Pierre Le Tan, Sophie Calle, Stak and Marc Newson created one of a kind erotic art pieces and photographs featured in 7 of the hotel’s rooms, and centered around the hotel’s name and theme, amour.  You can book a single room if you’re traveling as a couple, or get one of the hotel’s double rooms, which are small but comfortable and clean.  The single room rates are 145 euros in the high season, and 135 euro during quieter months.  Double rooms cost between 170 and 230 euros depending on the season and time of the week.  Black and white abstract art covers the walls of one of the hotel’s double rooms, which features an ensuite with double sinks and spacious bathtub.  A more laid back but interesting room features green walls with comparatively minimal amounts of graffiti depicting the theme of the hotel, Amour.  There’s also a yellow room with a mirrored armoire and a banana pillow displayed on the bed, probably as the main inspiration for the room’s color choice.

If you’re looking for a bit more room to spread out, the hotel also offers large rooms for 170 euros during off season and 230 euros in the high season, some of which are decorated similarly to a stylish Parisian studio apartment.  On weekends and during mid season, you can rent a large room for 210 euros.  For those travelers with more eclectic tastes, there’s a room at the hotel decorated with shelves upon shelves of toy figurines which form a unique headboard.  This room is still far from family friendly however, as its decor includes a decidedly phallic chair prominently displayed as the room’s erotic art piece. Some of the hotel’s en suite bathrooms feature a bathtub and double sinks for added comfort.  If you’re not a fan of artwork laden walls, you can ask the hotel about one of its more traditional rooms, which features a modern mirrored vanity for preparing for a night out.

The Hotel Amour offers trendy and unique rooms that feature quirky art pieces and non-traditional light fixtures.   The Superior Rooms are certainly no exception, and at 300 euros high season and 230 euros off season per night you can’t go wrong. A weekend in one of the hotel’s Superior rooms will run you about 270 euros, and this is also true for any night of the week during the high season.  One features black walls and bedding, the ceiling completely covered with nearly two hundred mini disco balls that reflect light and create a romantic ambience which continues into the en suite bathroom.  Overall, the rooms give the feeling of staying at the home of an artist, especially emphasised by the personalised touches such as nooks filled with books and various knick knacks.  Vibrant wall color choices add to the eclectic feel of the rooms, a feature that is mirrored in the hotel’s black painted hallways.

The hotel’s duplex rooms are probably among the most interesting and decidedly unique accommodation you’ll find in Paris.  They feature a comfortable living space just off the open bathroom, and the sleeping area is just a short climb away, cosily tucked away in the upstairs loft.  While you’ll pay more for these rooms, the space and convenience they offer are not standard in Paris, so the 350 euros per night price tag during high season is well worth it.  If you’re traveling when the city is in its low season, you’ll pay 310 euros per night, and on weekend and mid season visits it will cost you 320 euros per night.  For a great deal on rooms at Hotel Amor, you can visit their website and click on the Promotions link, where you’ll find rates as low as 100 euros per night for specific dates.

The hotel offers lots of opportunities for rest and relaxation in its garden, and you can get a table in the restaurant’s terrace, surrounded by ferns and other greenery.  Whether its a cosy dinner for two or a lively gathering of friends, the hotel’s outdoor restaurant provides a great ambiance under its glass roof.  In the homey atmosphere of the indoor restaurant, you can enjoy a bottle of wine from the hotel’s extensive collection as you dine at one of the large booths or intimate tables for two.  The hotel’s brunch menu is quite extensive, and features french classics like Croque Monsieur, and international favorites such as bacon cheeseburgers and pancakes.

Nightlife near the hotel is definitely worth checking out. If you’re lucky enough to get in, you can also party at co-founder Andre Saraiva’s Le Baron, an exclusive nightclub frequented by the fashionable and fabulous of the city’s inhabitants.  When you’re ready for some art that’s worlds away from what’s featured in your hotel room, Paris’ famous museums are all a train ride away.  Of course, if you’re staying at Hotel Amour, your trip to Paris won’t be complete without a night at the world famous Moulin Rouge, conveniently located on the nearby Boulevard de Clichy.