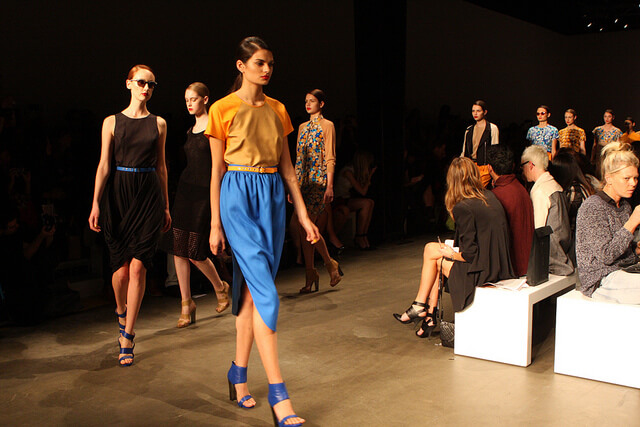 Twice a year, Paris is considered the mecca of all the world’s fashionistas, celebrities and fashion designers.  Paris Fashion Week, usually held at Carrousel du Louvre, is the grand finale of around a 100 shows put on by designers and fashion houses in the weeks leading up to it.  Models, designers, fashion editors, stylists and makeup gurus all flock to Paris to participate in and get front row seats at the shows that determine what to wear the following year.  If you’re thinking about traveling to Paris around this time, be sure to book your hotel early since you’ll be in competition with thousands of others who want a chance to be part of the Paris Fashion Week experience.

Each year, fashion houses and designers from around the world take part in four fashion weeks, in New York, London and Milan.  The Paris Fashion Week is the last of the year, and features ready to wear collections or Prêt-à-Porter, as well as Haute Couture collections and Men’s Wear collections. The big names in fashion hold their clothing exhibitions in some of the more iconic locations in Paris, such as the Espace Eiffel and the Grand Palais, while up and coming designers make do with modern locations such as nightclubs and warehouses.  If you’re planning on attending one of the Paris Fashion Week shows, you’ll probably also be interested attending in one of the many fashionable grand openings, parties and events held all over the city.

Given that its the home of iconic fashion designers and haute couture houses such as Coco Chanel, Hermes, Louis Vuitton, Dior, Balmain and Yves St. Laurent to name a few, its no surprise that Paris was the influencing factor in the birth of Fashion Week.  One woman’s efforts, influenced by the First World War, was the first step in creating what is now considered the biggest event in the fashion world.  The brainchild of American Vogue’s Editor in Chief, Mrs. Edna Woolman-Chase, who feared that the war could lead to the closure of Paris’ major couture ateliers, was held at the Ritz-Carlton Ballroom.  Although her fears were not brought to reality, she took steps to ensure that should America’s fashion inspiration come to a halt, the pages of American Vogue would still be filled.  Mrs. Chase began her campaigning at the dressmaker’s shops of New York, encouraging the best of the best to design and produce original creations which were then modelled by women selected and trained by Mrs. Chase.  This August 1914 show laid the foundation for what is now known as Fashion Week.

Although the first Fashion week was held in New York City in 1945, it is undeniable that Paris’ stellar reputation for producing some of the world’s most exquisite, elegant fashion pieces influenced the fashion industry from the outset.  In fact, it was the German occupation of Paris during the Second World War that resulted in the New York Fashion Week, then called Press Week.   The occupation meant that Paris was inaccessible to the fashion industry workers who traveled there, visiting French ateliers and fashion houses.  Until then, popular opinion was that American designs were largely as a result of copying of French designs, ensuring that the spotlight was always on Parisian designers and their creations.  Fashion Publicist Eleanor Lambert chose to grasp the unique opportunities provided by the German occupation of Paris, and showcase the work of American designers.  Because of this innovative stance, fashion journalists were able to appreciate the talent of American designers for the first time, without the overshadowing presence of French Haute Couture.

Nowadays, Paris Fashion Week marks the opportunity for retailers and the press to get a first glance at the designs that will be released in the coming seasons.  For this reason, fashion week is typically held months in advance, so that clothing and other designer items are available for purchase by the fashion conscious among us.  The Autumn-Winter show has its finale at the Paris Fashion Week in March of each year, and the Spring-Summer collections are typically showcased in October.  The men are not forgotten, with Menswear Autumn/Winter and Spring/Summer shows taking place in January and June respectively.  Haute Couture shows are the most exclusive, and take place only in Paris.  This is the highlight of Paris Fashion Week, and is governed by Chambre Syndicale de la Haute Couture rules.

The more serious side of fashion is demonstrated by the fiercely guarded term “Haute Couture”, which translates in English to high fashion or high dressmaking.  Only the best French fashion houses are entitled to use the term, and their standards are monitored by the Chambre de commerce et d’industrie de Paris which is responsible for compiling a yearly list of eligible members, with perks including the ability to use the term in advertising.  Those on the list earn their place due to the exquisite, high quality hand constructed garments produced by their highly skilled dressmakers.  The who’s who of societies all around the world turn to Haute Couture designers for one of a kind, custom fitted dresses and other garments that cost more than the average citizen spends on clothing in a single year.  While the term is decidedly French, it is also unofficially used to describe high fashion clothing produced by leading designers from other parts of the world.

For many budding fashion designers, a school by the name of L’Ecole de la Chambre Syndicale de la Couture can make a career.  The school’s most outstanding students are chosen each year to intern at the leading Couture houses in Paris, where they are exposed to the intricate techniques and unique fabrics used to make the world’s most exclusive garments.  A visit to one of these Couture houses can also be arranged through fashion schools in other parts of the world, and is a dream of many up and coming designers.  Whether you’re a tourist, or a young designer yearning for inspiration, Paris Fashion Week is the experience of a lifetime.

A strike by air traffic controllers will result in approximately forty percent fewer planes in the skies over France on...