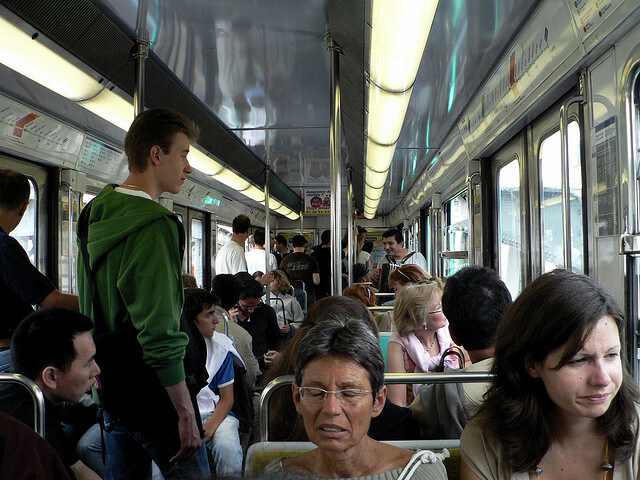 For people living, working and vacationing in Paris, the metro is an indispensable source of affordable and efficient transport.  Consisting of over 300 stations around the city, the Metro de Paris runs Thursday to Sunday between the hours of 5:30 am and 12:40 am, and Fridays and Saturdays between 5:30 am and 1:40 am.  The metro also runs on the latter time schedule on the day before a public holiday.  During rush hour, you won’t have to wait long for the next train, with wait times of up to 2 minutes.  At all other times, the wait is a bit longer at intervals of 8 to 10 minutes.  As Europe’s second busiest metro, over a billion people use the Paris metro each year.  No matter where in the city you’re headed, you can rest assured that you can rely on the Paris metro to get you there.

The metro was opened in 1900 during the Exposition Universelle or World Fair, with the launch of its first line.  The main parts of the system were completed around 20 years later, until it was expanded farther into the suburbs a decade later.  After the Second World War, development of the Paris metro reached its peak as new trains were added.  However, the design of the network meant that additional developments have been difficult.  This has been compounded by the proximity of metro stations to each other.  Travel in Paris has also been made easier with the introduction of the Regional Express Network, which connects with several metro stations to integrate both systems.

Suburban trains, tramway lines and two driverless mass transit rail network lines also supplement the Paris metro system.  The Vehicule Automatique Leger, designed in the first half of the 1980’s, is the first of its kind to be used as public transportation for a city.  Paris Metro Line 14, built to meet growing demand and supplement transportation previously done by Regional Express Network Line A, is the city’s only completely automatic metro line.  Transportation options in and around Paris as well as farther out is expected to be developed with the addition of the Grand Paris Express, which is expected to open by the year 2020.

While the word Metro is now commonly used to identify rapid transit systems and subway networks in France and other cities around the world, its etymology is quite interesting.  It is derived from the name of the company that first ran the majority of the network, La Compagnie du chemin de fer metropolitain de Paris, or in English, the Paris Metropolitan Railway Company.  The initial abbreviation was Le Metropolitain, but it was later abbreviated to metro.  Nowadays, the metro is run by a public transport authority by the name of Regie autonome des transports parisiens, or RATP.  The RATP provides useful information on scheduling, tickets and passes, as well as a route planner which can be found on their website.  The route planner is a handy tool that can assist in planning your itinerary as you explore the city.

Convenience is a major factor in making the metro the number one form of public transportation in Paris.  The stations are located within reasonable distance from each other, and the dense network of stations makes connecting easy.  Two way tunnels are used in the Paris metro, with the trains driving on the right hand side of the tracks.  Depending on the line, there can be as few as three and as many as eight cars in each train, and all trains stop at every metro station.

One of the perks of traveling on the Paris metro is that while you wait at the station, you can take advantage of the free WiFi offered since 2012.  This service isn’t available at all stations, but the short wait times means that entertaining yourself isn’t much of an issue.  Purchasing tickets for the metro is also extremely efficient, as you can use one of the automated machines in English, French and German, or visit one of the kiosks located at the entrance to the metro station.  Entering the platforms requires use of either a smart card or tickets purchased at the machines or kiosks.  Your ticket will be returned to you at the platform gate, and can be checked randomly during your journey although they are not normally collected or checked when you arrive at your destination.  The standard ticket allows unlimited metro to metro, bus to bus and tram to tram transfers within an hour and a half of validating the ticket at a metro station entrance.

Tourists can take advantage of the Paris Visite contactless smart card which is valid for durations of one to five days.  Cards come with transfer options either for zones in central Paris, or the whole network including the airports, Versailles and Disneyland Paris.  While a Visite Paris card is a great option, you can save money if you purchase a regular weekly smart card, which resets every Monday.  If you’re a student in Paris, you can purchase a yearly card called Imagine R.  Alternatively, for the person working in Paris, the Navigo integrale is a great option for traveling on the Paris metro.  Daily tickets for people under the age of 26 is also available for use on national holidays and weekends, and costs around half that of a Mobilis pass.  You can also purchase a monthly ticket if your vacation extends for longer periods of time.

Sightseeing is extremely easy using the Paris metro, since many stations exit near the city’s star attractions.  The art nouveau interior decorations and colorful art and posters lining the outer walls of the metro stations provide visual interest points as you make your way to your destination.  The metro station near the Louvre has been graced with copies of some of the great works displayed at this world famous museum. The stations at Arts de Metiers, Bastille and Saint-Germaine-des-Pres have also been decorated in similar fashion as their historical locations.

The union of French taxi drivers have declared there will be issues if the government does not ban the ride-sharing...