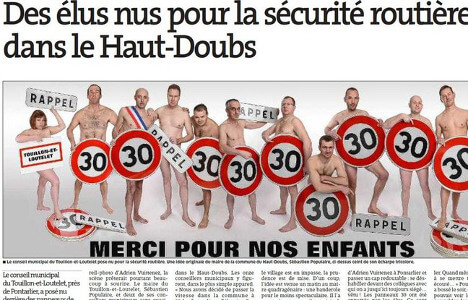 Driving speeds not only in Paris but around France have a reputation of being fast. How do you get motorists to adjust to a new reduced speed limit of 30 kilometers an hour? A naked protest by a group of councilors bares all to slow down traffic and make a point.

In a new campaign, a team of ten men and one woman stripped with only the protection of speed limit road signs. A photo of the group has been made into a banner to hang in the town’s streets, which shocked motorists.

The Mayor of Touillon-et-Loutelet stated that while the idea might sound bizarre, it seemed to be one of the best ideas to get people to take notice. Speed limits were reduced and they felt the best way to communicate that to the town was through this shocking campaign.

A large percent of the population of this small town are under the age of 11, and without a sidewalk down the main street traffic speeds were dangerous for small pedestrians.

The campaign was not constructed and meant to be offensive; surprisingly members of the council board were not the first people to ditch their clothes in an effort to get their message across.

Although the tradition of naked protests seems to live on partly because of media attention given to bare protesters as opposed to clothed there seems to be nothing better to attract media attention.

French Prime Minister Manuel Valls has defended the criticized new law that would allow spies to gathers data from suspected...