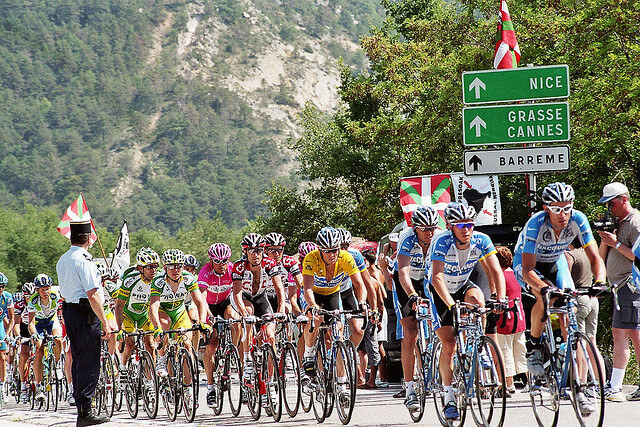 It’s spring time in France, and Paris is set to host a variety of upcoming events. From the Tour de France, to the Chocolate Fair and everything in-between. For long time Parisian lovers, and newcomers to the city, eParis presents the following guide on upcoming events in Paris.

The new edition of the Tour de France includes 26 passes and a spectacular route. Departing from the Netherlands, the Tour continues towards Normandy with the highlight being the breathtaking cliffs of Etretat. The last week includes five days in the Alps before the final stage on the Champs-Elysees.

One of the four prestigious Grand Slam tournaments, held annually since 1928, this is the only one held on clay. It brings together the cream of the tennis world, with Roger Federer, Rafael Nadal, Monica Seles, Justine Henin, and Serena Williams having made tennis history here. This prestigious event is held at Roland Garros which is also a sports village.

The Paris Chocolate Fair is the world’s largest chocolate-themed gathering, with over 130,000 international chocolate-lovers and 180 of the best chocolate makers showcasing their best products. Discover all the latest trends and flavours emerging in the industry and learn more about the traditions and skills involved in chocolate-making. Watch demonstrations and participate in workshops with top chefs and experts. There will be something for all tastes at the Salon du Chocolat, which also features a fashion show of chocolate dresses every year.

Held at the Cité du Cinéma, this exhibition is dedicated to the world of Harry Potter. You can wander the halls of Hogwarts, discover decorations and sets of the films and marvel at their props and costumes. See creatures such as elves and phoenixes, and immerse yourself in Harry Potters world.

Madonna has planned super-concerts in the most stunning venues in the world as part of her world tour in 2015. This tour promises to be a spectacular one, and will be an opportunity to hear songs from her 13th album, Rebel Heart.

Legendary British rock band The Who, play at Zènith de Paris for two nights only.

This year marks the 50th anniversary of the death of Winston Churchill and the 70th anniversary of the end of World War II. This exhibition will examine the lives of Churchill and de Gaulle, with objects, speeches and audio-visual/archival material from their lives presented to the public, many for the first time. Two wartime tanks, the French B1 Bis and the British Matilda Mk II, will be part of this major exhibition.

Andrè Rieu with his Johann Strauss Orchestra will play at Zènith for one night only. Of his concerts, Rieau says:”The orchestra consists of young, enthusiastic musicians … people sing, chant, clap, jump and dance, anything goes”.

The 20 Kilometre Race is celebrating its 34th anniversary. This is an opportunity to share and encourage others, and fun is the key word for this event. The race will start at the Pont d’Iéna and lead runners through the streets of Paris.  There is a loop in the Bois de Boulogne and a stretch along the banks of the Seine.

“From the Sidewalk to the Catwalk” is a phenomenon that has won over more than a million people during its international tour. This must-see exhibit will present pieces of haute couture and ready-to-wear created between 1970 and 2013, including some that have not been on show in public before. This multimedia exhibition also involves sketches, archives, stage costumes, film clips, shows, concerts, music videos, dance performances, and snippets of television programmes.

The Paris Air Show is the largest global event in the aerospace industry, with over 145 countries and 2100 exhibitors making up the largest air show in the world. Discover technical developments within the industry, with the highlight of the show being aerobatic demonstrations from the latest aircraft in the aviation industry. This is an exciting way for fans to discover the latest military fighter planes.

Previously known as Gay Pride, the LGBT March is a national event that promotes equality and pride for people of the LGBT community. A significant crowd gathers every year in the French capital and attracts over 700 000 marchers every year, with over 80 vibrant musical floats. A number of large French companies and political parties have floats in the parade, celebrating the right to equality in the workplace and political circles. Open to all.

France commemorates the start of the French Revolution with a national holiday on 14 July, with mass celebrations up and down the country, Bastille Day is a mix of pomp, ceremony and fun. Every village and town have their own communal meals, dances, parties and fireworks displays. The festive atmosphere starts early and goes on until late into the night.

The Paris Museum of Modern Art is showing an exhibition devoted to Andy Warhol. It is based on his Shadows series made in 1979. Two abstract photographs of shadows are printed on a background painted with a sponge mop, with 17 different colours. Shown for the first time outside the United States, this installation covers over 700 square metres.

U2 The Innocence Experience tour – 10 November to 15 November

Returning to Bercy, U2 are back with their new world tour. This follows the recent release of their 13th studio album, Song of Innocence, released for free on the groups official website. The new album was also distributed by Apple and has been downloaded by 30 million fans worldwide.

Driving speeds not only in Paris but around France have a reputation of being fast. How do you get motorists...