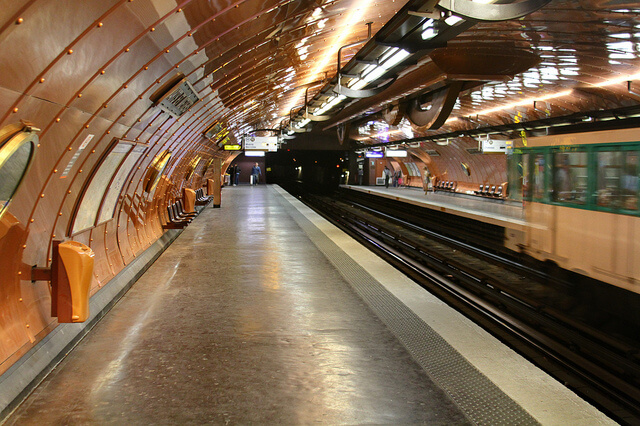 Tourists visiting Paris would typically not think to tour the Paris Metro, but there is an alternative underground sightseeing experience worth seeing.

Paris underground offers original entrances decorated in art nouveau, to cleverly curated platforms that make up the Paris subway system as a piece of art.

This station is located on the way to the Louvre station and is one of the most popular attractions in Paris. The Louvre hosts over 9 million visitors a year, and not too surprising that the Paris underground reflects the style and stature of this museum. Constructed in 1990 at the same time as the glass pyramid, this metro station is lined with replica art work that mirror the pieces within the museum.

Although the station no longer provides access to the museum, visitors riding on Paris transport can admire the uniquely curated platforms. Palais Royal-Musee du Louvre is the Louvre Museum’s main metro station, which is also a must-see. The unique Place Colette entrance is made from multi-colored glass baubles.

Concorde is a large interchanging station in the Paris underground that links several lines. It’s the main station if you’re planning a visit to the Orangerie Museum or walking up the Champs Elysées. Debuted in 1990, it is one of the most recognized stations in Paris due to the walls of line 12.

One of only two original art nouveau glass canopies left in Paris, the entrance to the Abbesses Paris station is stunning. Constructed by Hector Guimard, this entrance used to covered the metro at Hôtel de Ville, before it was moved to the Montmartre in the 1970s.

Pont Neuf is the oldest bridge in Paris constructed in 1607 it’s one of Paris’ most popular landmarks and visited by visitors taking a walk across the River Seine to the Île de la Cité to visit the Notre Dame and Sainte-Chapelle.

The theme of the Pont Neuf Paris underground represents the Monnaie de Paris that is located around the corner. Along the walls of the platforms are large replicas of French currency in the form of coins, as well as displays and scales.

The walls were decorated in 1989 by Liliane Belembert and Odile Jacquot to celebrate the bicentenary of the French Revolution. From the platform you can see the five frescoes depicting historic French scenes.

Bastille is historically known as the site where the prison was stormed on July 14th, which marked the start of the French Revolution. Arriving at this station you can see the Bastille Basin, which is a small boat basin linking Canal Saint-Martin to the River Seine.

The ceilings of this station are vaulted and decorated in copper, the Arts et Metiers station was designed to look like a submarine, accented with portholes and exposed bolts. The Arts et Metiers Museum above the station contains fascinating displays of technological evolution, that includes vintage cars as well as Foucault’s pendulum.

The Arts et Metiers station was designed based on the writing of French novelist Jules Verne and is a reflection of the museum.

Police say they have broken up a network of sex tours that took Romanian prostitutes around French cities on sex...