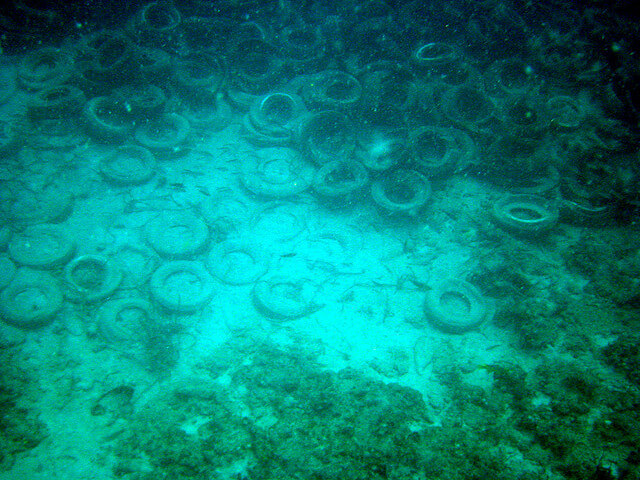 In the 1960s, it seemed like a win-win idea to sink tires into the sea to create artificial reefs that would ultimately stimulate marine life, aide the fishing industry and get rid of unwanted scrap.

However decades later and after millions of tires have been sunk into the deep, authorities are worried about pollution and are beginning to haul the tires back.

On the French Riviera coast, authorities have begun an operation to remove approximately 2,000 tires, which will begin a trend to reclaim all 25,000 tires under the sea between Cannes and Antibes by next year.

According to scientists, approximately 200 artificial reefs made of tires exist worldwide, in locations off the United States, Japan, Malaysia and Israel.

The issue has been that the tires have been dragged about by the currents and often broken up, further damaging the ecosystem and failing to attract the expected marine life.

Colonization is difficult because the used tires are covered with hydrocarbons. When the tires break up over time, they release heavy metals toxins into the ocean habitat that are deadly for marine life.

The agency in charge of protecting marine areas aims to restore the habitat by removing the tires.

In addition to the environmental impact, the desired results for sparking marine life has failed to materialize. Tire reefs are 40 percent less efficient than concrete artificial reefs.

There are an estimated 90,000 million of artificial reefs made of tires in France compared to around 20 million in Japan. The United States has more than 1,000 artificial reefs on its coastline and about two million tires were sunk off the coast of Florida in 1972 in an attempt to promote marine life.

In Florida as with other areas, the tires have become detached after storms and currents and washed up on beaches causing environmental damage and ultimately harming the natural coral reefs.

Florida’s environmental agency described this as a serious threat and launched a program to begin removing the tires in 2007.

The Eiffel Tower was closed Friday morning, as workers protested over the rampage of pickpockets around the monument, who they...