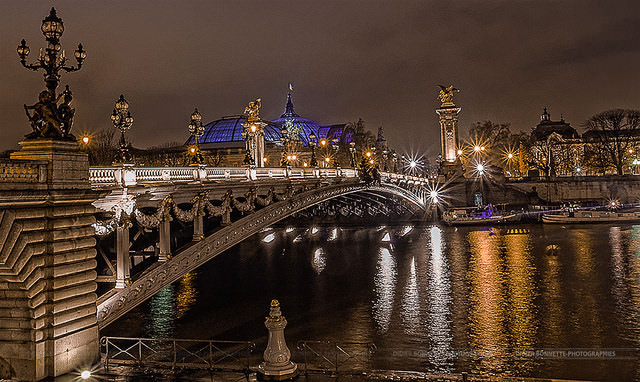 The Pont Alexandre was constructed at the end of the 19th century as part of a series of projects undertaken for the Universal Exposition of 1900. The exposition resided on either side of the Seine River and a new bridge would enable millions to easily access both sides of the river. Construction of the bridge was designed by architects Résal and Alby which took nearly three years to construct. One requirement for the bridge was that it could not obstruct the view of the Invalides and Champs-Elyésees which resulted in a very low (132 ft) wide bridge with a single (353 ft) span and a height of 20 feet.

The bridge is lavishly decorated by lampposts and sculptures of cherubs and nymphs. Each end of the bridge is marked with gilded statutes of granite pillar that were constructed by different artists. Construction of the bridge began in May 1897; however the first stone was laid in October 1896 by Russian Tsar Nicolas II to symbolize friendship between Russia and France. The Pont Alexandre opened in time for the Universal Exposition of 1900 along with other notable structures like the Gare d’Orsay, Petit Palais and the Grand Palais.