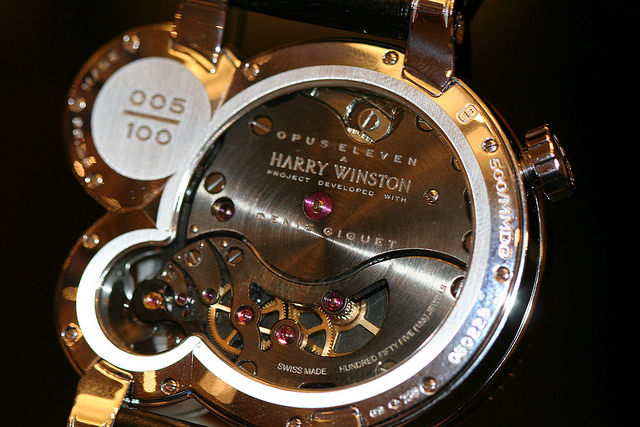 Eight men are accused of disguising themselves as women and stealing expensive watches, necklaces and earrings from a Harry Winston boutique.

This is noted as being one of the world’s biggest jewel heists, disguising themselves first as painters then as women to steal €100m in watches, necklaces and earrings in two raids in boutique on the Champs Elysées.

The first robbery was at a Harry Winston store which occurred in October 2007 when four armed men dressed as painters entered the store. A security guard at the store has been said to have helped them enter the building through a service entrance the prior night. The next day they entered the store as staff was opening up, where they hit and tied them up and forced the manager to deactivate alarms and open safes. They made off with an estimated value of more than €32m.

A year later the store was robbed again. Four men, two of whom were wearing wigs and dressed as women, entered through the main entrance, with the assistance of the same security guard. In less than 20 minutes they stole an estimated value of more than €71m.

The suspect, Douadi Yahiaoui, previously served 23 years in prison for other convictions. He is suspected of being the ringleader behind the robberies. Also in court is the security guard–his lawyer said his client was hoping for some serenity after the trial.

A Picasso painting stolen in Paris approximately 14 years ago arrived in New York after being sent across via the...